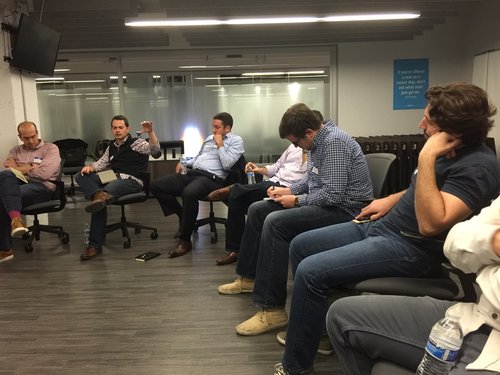 How to Run Great Board Meetings (part 2 of 3)

Last week, we published Part 1 of “How to Run a Great Board Meeting”. It was focused on the steps we take a before conducting Mentor Team meetings for companies enrolled in The Junto Institute’s Apprenticeship program.

In this second part, we move on to the steps we follow the day of the meeting. Once again, there is significant attention to detail which, after holding over 100 such meetings, we have learned has a dramatic impact on the meeting effectiveness and outcomes.

PART TWO: DAY OF THE MEETING

We do our best to be the first to arrive, often 15-20 minutes before the meeting time. Junto ensures the room is clean and ready for the meeting, placing the agenda and company dashboard at each spot around the table. Since one of our team members will take notes during the meeting, this person signs onto wifi and opens a Google document to take the notes. If anyone is joining us virtually, we setup audio and video for the Google Hangout or Skype call. Then, as Mentors arrive we greet them along with the leadership team.

Our lesson learned: Setup always takes a little longer than planned, and the earlier arrival, the better.

We kick off the meeting with a brief reminder of Junto meeting protocols, such as starting and ending on time, sticking to the agenda’s questions, and using shared experiences over advice-giving. Emotional intelligence is a core element in The Junto Institute’s curriculum, and several of these guidelines exist to encourage and establish the development of more emotionally intelligent behaviors. At the beginning of the program, we are more active in enforcing these during the Mentor Meetings.

For example, we use a light table-knock to indicate when a protocol is not followed along with a gentle reminder of the protocol itself. Throughout the nine-month program, the meetings eventually become self-managed. Over time, the Mentors and even the Apprentices begin to table-knock on their own protocol breaks, often accompanied with some humor.

Our lesson learned: Discussions are more effective and taken more seriously when standards are set and followed.

As mentioned above, someone from the JuntoTeam is in the room taking copious notes during every Mentor Meeting so that the participants can be as engaged as possible in the discussion. The notes are especially helpful when someone is absent and wants to catch up on what was discussed. Both the company leaders and Mentors refer back to the meeting notes throughout the program and periodically access them after the nine-month program is over.  Therefore, we take special care that the note-taker captures as much of the meeting discussion as possible.

Junto also lightly moderates the meeting to help the group stick to the agenda, timeframe and protocols.

Our lesson learned: Take the administrative burden off the companies. They learn best when engaged in the conversation.

Ten minutes before the meeting ends, we start the process for meeting closing. This begins with everyone going around the table to share an appreciation, followed by meeting evaluations, action items, and scheduling the next meeting.

Our lesson learned: Dedicated time for reflection and closing tasks helps the meeting finish on a positive note and minimizes loose ends.

Click here for part three of this blog on “After the Meeting”.