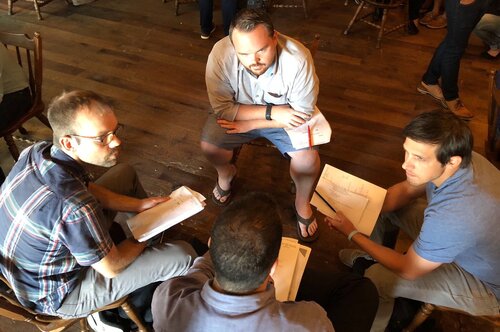 Practicing Emotional Intelligence by Squaring Up

When I had my first in-person meeting with someone new several months into lockdown, it was like how most people were gathering at that time. We met in a large space, socially distanced by two strategically-placed and farther-apart-than-usual, soft tan leather couches.

He asked about Junto’s take on emotional intelligence, and specifically about model behaviors. One that I shared was generous listening: “giving” ourselves to the other person when they’re speaking with our eyes, ears, mind, and body.

As I described generous listening, I shared that with the relative novelty of being with someone new after several months, and my self-indulgence of sitting on a comfy couch, I realized I was slumped and not “squaring up.” It’s a term that describes aligning our shoulders, hips, and knees with another person in conversation.

As I sat up, fixed my posture, and began to demonstrate, he predictably followed along. And as the conversation unfolded – again, predictably – I noticed we were both listening in a deeper way.

The whole episode reminded me that it’s one thing to know emotionally intelligent behaviors and another to practice them. And that when we do, they can have a positive impact not only on us but others.