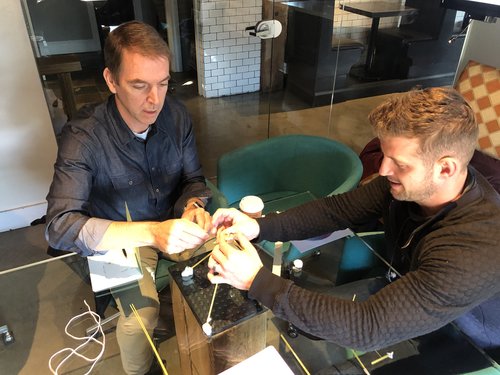 Their Reality and Our Identity

How others see us is one of the elements of self-awareness that doesn’t get talked about enough. At the same time, many of us have little data on what people truly think of us, and instead often make up narratives in our mind.

As I’ve shared in my talks on emotional intelligence, one of the best questions I’ve come across to help build self-awareness is, “How am I perceived?” As opposed to, “What do you think about me?”, the former question takes a burden off the shoulders of the person we’re asking, uses an “I” statement rather than a “you” statement, and gives the responder the freedom to give feedback using second and third person perspectives.

I was reminded of this idea last week when we introduced Junto’s new logo. The number and types of responses struck me in an unusual way. While I admittedly was hoping that people liked it, I was caught off-guard by two common themes.

It was that second theme that really got me thinking about perception and reality. As you can tell, it implicitly compares the new logo to the old one which was designed just as we launched Junto in 2013.

Back then, no one (including our team) knew what Junto would turn out like nor what our true identity would be. And truth be told, we didn’t even have a mission statement

Rather than reflecting on what we wanted Junto to be, I simply told our talented graphic designer, Catherine (my co-founder in her spare time 😉 that I wanted the logo to be “edgy classic”: reflect the era of Benjamin Franklin yet communicate the integrity of an institution of higher learning. In other words, I wanted it to capture what I envisioned rather than what we really were because we didn’t know what we were.

But as time went on, Junto obviously built an identity, both in our minds and – more importantly – in the minds of our members. And because it is such an engaged community, we would continually hear how they perceived Junto which only continued to feed our understanding of Junto’s identity.

So our appreciation goes to all of our members and mentors for helping build our corporate self-awareness. Without even knowing it, their answers to “How are we perceived?” became the thousand words worthy of this lovely new picture.